True Blood, Look What You've Done to Me

For the past year I had given up on HBO.
It's not that I don't appreciate the quality of programming it's provided in the past.
It's that the more recent programs haven't been extra cable fee worth.

Let's take a look at what I'm saying:

Curb Your Enthusiasm - This is a wonderfully structured improvisational sitcom with great music, but the storyline is repetitive. Larry David accidentally offends, he won't apologize, hilarity ensues.

Entourage - This show reminds me of the Kayne West song Good Life. It's all about trying to keep those roots while moving on up. In this case, it's about being a movie star and livin' large in LA with fast cars and hot women. It was really fun the first few seasons, crazy parties and loud Ari, but it's not a show I miss watching.

Big Love - I used to love this show, first and second seasons were pretty enthralling. At times this show reflected the power of families working together in criminal activities more than The Sopranos. Yet, the show has somehow meandered about and lost some of it's allure.

Hung- The ads alone for this show turned me off. They took over bathroom stalls in NYC to show how 'sexy fun' this show is going to be. If you have to try to make me think that with intrusive campaigns, I'm not going to believe you.

East Bound and Down - Here's where I get controversial ... I hated Fist First Way. I haven't even tried this show, but I hear I should give it a chance. Perhaps I will overcome my mental block because ....

True Blood - My friend and I rented True Blood one lazy weekend and got hooked. It's hard not to fall for this fast paced thrilling story. It's also easy to see why some people are so easily turned off by it. The characters, in the beginning of the first season especially, are in desperate need for southern dialect couches. Each episode ends on an edge of your seat cliff hanger though, that makes you want to know what happens next to these characters you unexpectedly fall for again and again. By the third episode we were cheering the sounds of the opening sequence. We want bad things to be done to us you crooner.

The second season was just starting the weekend we finished the first season. This is when I realized we had gone mad for True Blood. My friend and I started seeking out the new episodes - on the net, at friends houses. We'd been doing pretty good catching up here and there with the season, until this weekend rolled around.

The finale occurs tomorrow night and we began trying to figure out how we could get HBO. "Maybe you could go out and meet a dude with HBO..."
No! I won't pimp myself!
"Maybe we could chip in and get a hotel room..."
Is it really worth $50 each?
Then, I came to ridiculously simple epiphany - I can just get HBO. For like $12 more bucks a month I'll get it just so we can see the end of this saga.

So, this morning, I called up and got the channels and I'm re-watching the season with bated breath waiting for tomorrow.
Perhaps I'll try these other shows again, or for the first time, to see if they'll change my mind. Who knows? They might be a fun way to pass the time. 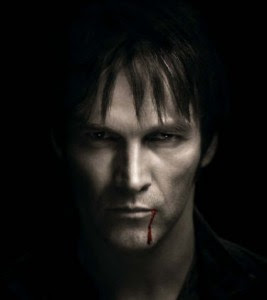