The Importance of The Daily Show

This could also be titled: Why I Went to The Rally to Restore Sanity

Each generation has their news man. (It's usually a man, sorry ladies.) A man that we trust to tell us the news in a fair and balanced manner. There was Cronkite, Rather, Brokaw... the Gumbels.

My generation has too many channels for there to be anyone to trust. It started with CNN, and that was a good idea. Sure, it helped keep us informed during the first Gulf War, 24/7...but then there came a giant flood of news stations. News stations have news stations. It's ridiculous, it's biased, it's sensationalized, it's hard to believe. But from this darkness a bright light shined, and it was hilarious.

It's purely satirical. It's an unbiased look at the news, because no one is spared being made fun of. Best of all, it brings important news stories to the forefront in a manner that isn't meant to cause panic, but informed action.

I'm absolutely not the first to realize the phenomenon that this show has become. But, I do feel it's important to call out that perhaps this show has become the Nightly News of my generation because the way we've been reporting news is so ridiculous. There was a reason it was called "The News Hour". Perhaps we don't need continuous reports every minute. If you wanna go 24/7 report local stories, not embellished stories full of fear and clashing opinions. It's frightening that 20% of Americans actually believe we'd elect a president that wasn't an American - and the story is being perpetuated by someone who isn't even American!

To stop insanity like this, and have my opinions be heard in a reasonable manner, I went along with some friends to The Rally to Restore Sanity. It was a long trip, full of hours of waiting, epic lines, and exhaustive walking to not even get near the stage. But it was fullfilling to see that there are a lot of people looking for calm discourse. For change without screaming, for news programs to return to news programs so comedy can just be funny again.

Speaking of funny, check out our signs... 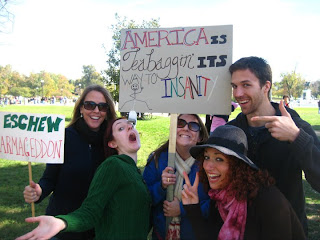