How I Met Your Mother is worrying me lately. I'm starting to think they have some self-esteem issues. They're a great show, well-written, funny, amazing cast -- so can someone tell my why they're doing rating stunts like having yet another Pop Princess guest star? When you're doing well in the ratings -- have fun, not bad actresses. I love how BuddyTV summed it up in their photo gallery: 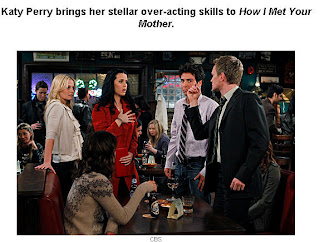 Perhaps they're doing this because the last two episodes of HIMYM were giant tear-jerkers.

I just find this pattern odd, and a little off-track. After two such serious episodes, they follow with a publicity stunt -- do we think they're building up to something big like revealing who gets married (The season opener showed Marshall and Ted discussing relationships and going into a wedding that neither of them were the groom.) or Lily being pregnant, or perhaps getting to the titular clincher and seeing once and for all how Ted meets someone that would marry him?

I hope so, because if not I feel like we need to send the writer's room some flowers and say - Hey gang you're great! Can we get back to you writing greatness for the main characters again? Thanks! Hugs, Your fans.

...I'll still totally tune in though. My dream is that Robin Sparkles and Katy Perry have a sing-off. (Team Sparkle, obvi)
Posted by TheSueFunke at 7:14 AM

Labels: Guest Stars, How I Met Your Mother