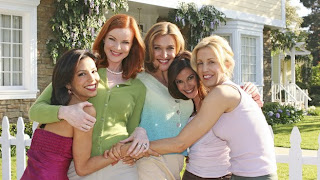 You'd be hard-up to find someone who loved the first season of Desperate Housewives more than I did in it's premiere year.
I told everyone I knew about how great of an ensemble the cast was, and how quirky/mysterious the storyline was.

Then, season 2 occurred. What a difference time off made! It was horrifically boring, and instead of delving back into the characters we grew to love- it went the same way Heroes did and added characters no one really cared about with storylines that didn't really measure up.

This was a tough time for me and Desperate Housewives, until I was reunited with it via the Lifetime Channel's mini marathons. Three hours a day, while I had the flu, I caught up with this show as if it were my job, starting on season 3.

It was amazingly better, vastly improved, and the gang one Wisteria Lane was forefront again in the storylines.

Fast forwarding season 4 was absolutely genius. It added depth to all of the characters, and brought an interesting twist to every storyline.

Now, I feel like it's 2004 all over again. It's Sunday night, and I'm all psyched up for some DH. The show is coming back from it's holiday break - I'm once again hooked. I can't wait to see what will happen next - and really, isn't that what you want from a fun weekend show? (I'm looking at you Big Love to bring that in a few weeks... don't you go breaking my heart.)
Posted by TheSueFunke at 3:51 PM